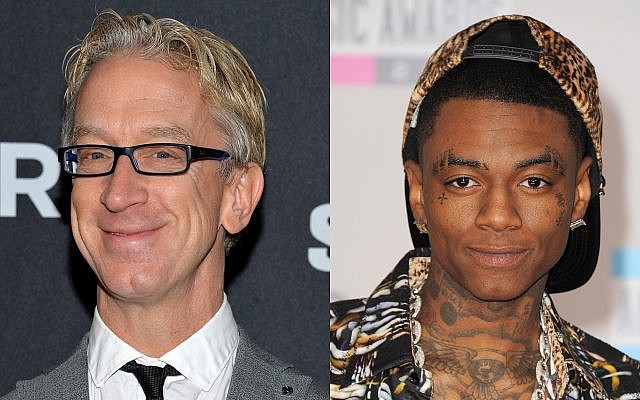 Yes, you read the title right...

A group of white supremacist YouTubers are using a new app to pay celebrities to create videos where they make coded anti-Semitic statements — and then the YouTubers use those recordings to promote hatred on the internet.

The videos were made using Cameo, where users can pay to have celebrities record a personalized message for them. Cameo launched in April 2018, and has become another platform that the far-right has seized upon in an attempt to legitimize racist messages — this time with seeming celebrity endorsements.

Cameo and representatives for the celebrities told BuzzFeed News they were unaware the messages supported anti-Semitic conspiracy theories. The two alt-right leaders behind the campaign bragged about duping the celebrities in a livestream on Wednesday.

The group behind the videos refers to itself as the GDL, or Goyim Defense League, using the Hebrew word for a non-Jew. The group is apparently run by two YouTubers who go by “Handsome Truth” and “Sway Guevara.”

In one recent video, former Green Bay Packers quarterback Brett Favre — one of the NFL’s most legendary figures — addresses the group.

BuzzFeed News has viewed the videos but will not include them in this article, since the users who paid the celebrities have said in livestreams this week that they want the recordings to go viral.

“Brett Favre here with a shoutout to the Handsome Truth and the GDL boys,” Favre says in the shaky video. “You guys are patriots in my eyes. So keep waking them up and don’t let the small get you down. Keep fighting, too, and don’t ever forget the USS Liberty and the men and women who died on that day. God bless and take care.” 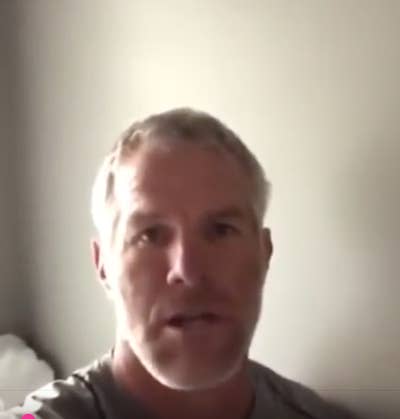 The video is loaded with coded anti-Semitic language. For example, “small” stands for “small hats,” a slur for yarmulkes.

The USS Liberty is a dog whistle referring to an incident in 1967 where Israeli forces fired on the US spy ship, killing 34, during the Six-Day War. In the aftermath, Israel said that its pilots had thought the ship was an Egyptian vessel, and apologized — the government eventually paid out $6.7 million in reparations to the survivors and families of the dead. Ever since, there have been unproven conspiracy theories surrounding the circumstances that question whether the attack was intentional. Both the Israeli and the United States governments have said that it was a case of mistaken identity.

In the 51 years since the shots were fired, many people, including some former USS Liberty sailors who survived the attack, have questioned the official explanation and pushed for another investigation. “Remember the USS Liberty” has recently become a rallying cry for anti-Israel and anti-Semitic individuals who believe that Israel deliberately fired on the ship.

Cameo’s CEO told BuzzFeed News that Favre’s team was made aware of the video when it started to go viral on alt-right internet spaces, and his reps reached out to Cameo to have it removed.

When someone books a Cameo, they submit specific instructions to the celebrity for what to include in the video. The celebrity then reviews the request and either accepts or rejects it. If they accept, the buyer will get a video within the next few days. A video from Brett Favre goes for $500.

“Here’s the deal, guys, they can reject it if they don’t like it, right,” Handsome Truth said in a livestream Wednesday. “So we were trying to get it, like — we wanted to be cryptic enough to where they would say it.” 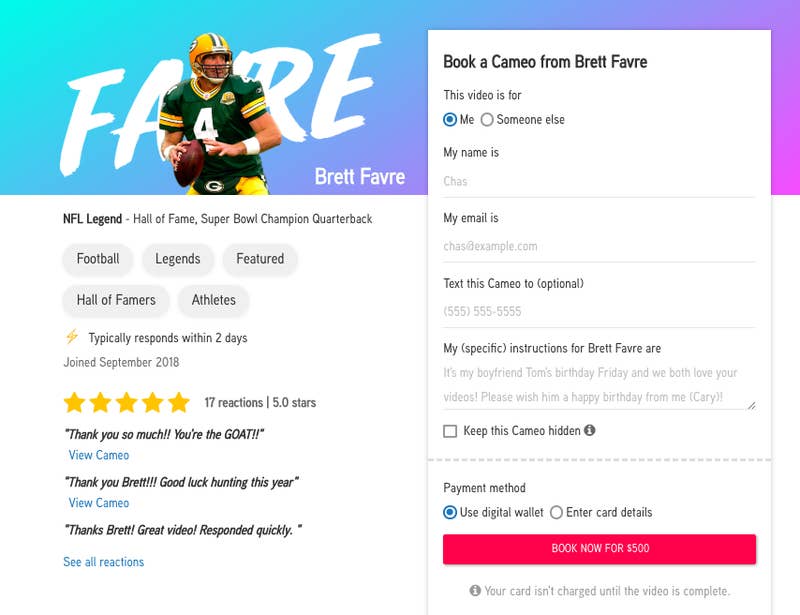 BuzzFeed News obtained the request that was sent to Favre. 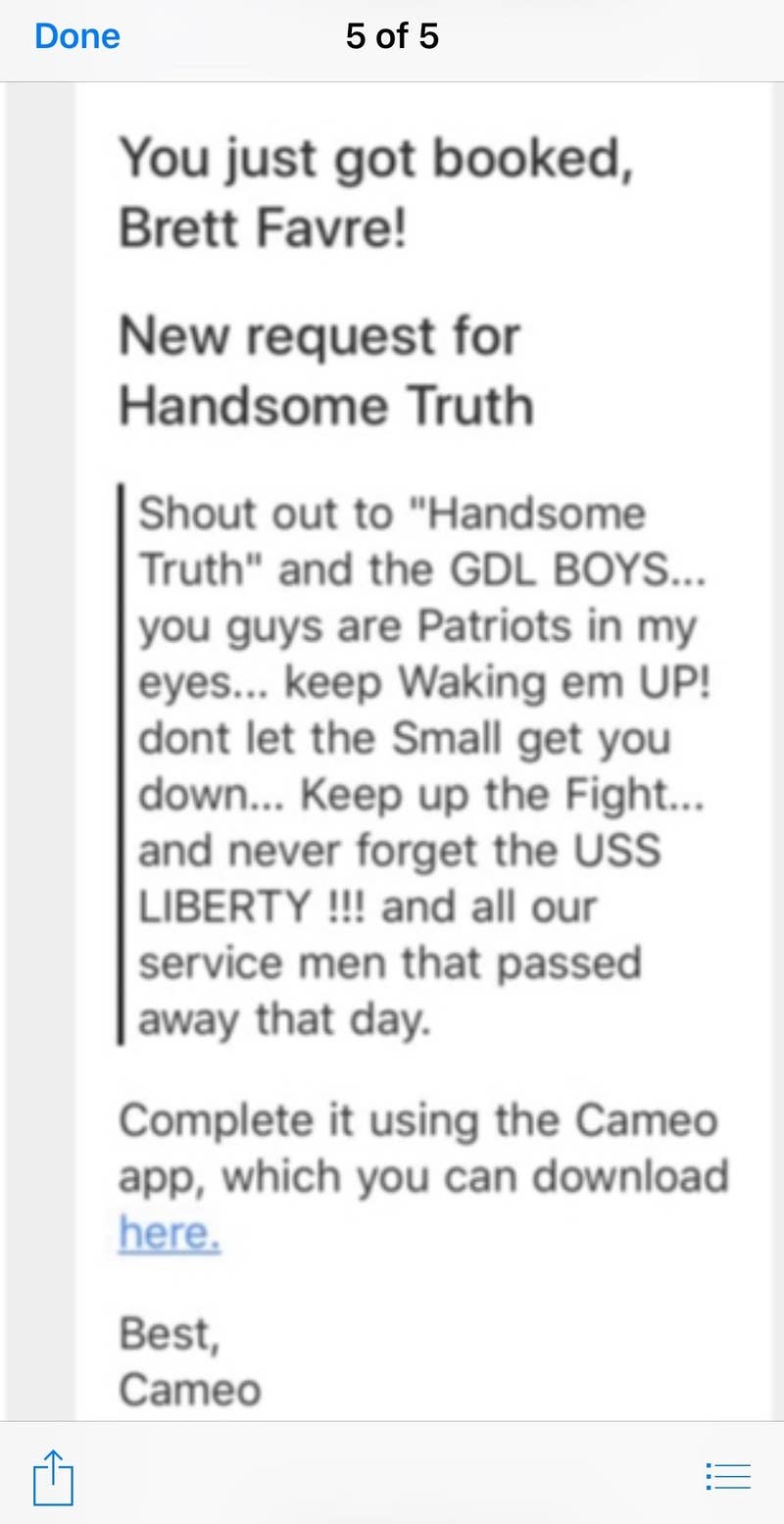 On Saturday, Favre directed BuzzFeed News to a statement on his Facebook page explaining that he thought he was making a video "to support the brave men and women of our military forces."

"A few days later, I was distressed to learn that the request came from an anti-Semitic group that reposted my video with comments implying I endorsed their mission. Nothing could be further from the truth."

Favre said that he is donating the $500 Cameo video fee to charities that combat hate and bigotry.

"Like most Americans, I am sickened by what these groups stand for and concerned about their role in fueling today's negative political climate," he said.

Comedian Andy Dick also made a personalized message for another member of the GDL, who goes by the name “Sway Guevara” on YouTube. According to the prices on Dick’s Cameo page, it cost $99.

“Hey, Sway, shoutout to the GDL, hope you guys keep up the great work. Remember what happened that day on the USS Liberty. And keep our military troops—”

The video cuts off at this point. It’s unclear what prompted Dick to leave the message seemingly unfinished. 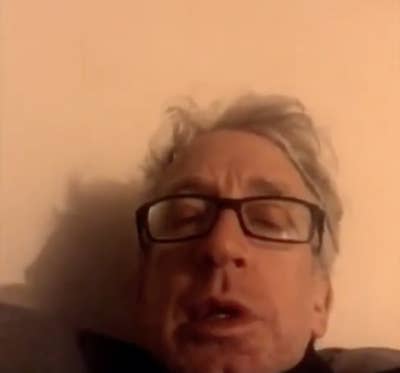 Rapper Soulja Boy also appears to have inadvertently made a video for the anti-Semitic group.

“Shoutout to Handsome Truth and Sway at GDL,” he says in the video, before telling viewers to check out their new single “Name the Juice” on Soundcloud and to subscribe to Handsome Truth 14 on YouTube. “GDL for life, bitch.”

According to his Cameo page, Soulja Boy received $100 for the personalized message. 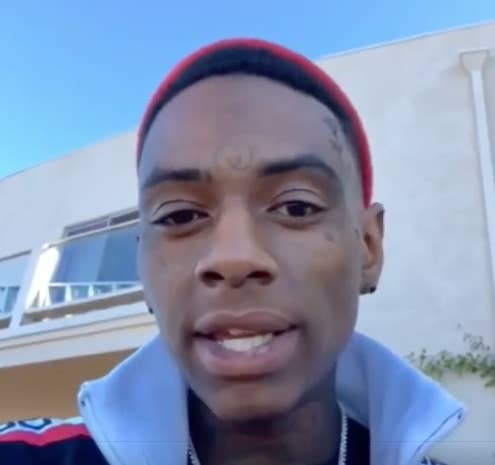 Representatives for Andy Dick and Soulja Boy told BuzzFeed News that both men thought they were supporting fans with their Cameo messages.

In a brief conversation with BuzzFeed News, Andy Dick said that he was devastated by the realization that he had been taken advantage of by a white supremacist group.

“Andy has zero sympathy for their cause, and feels used and manipulated by people who presented themselves as his fans but obviously wildly missed his intent,” a representative for Dick told BuzzFeed News separately.

Dick did make anti-Semitic comments about radio host Howard Stern in 2011 in reference to a business dispute. He’s also reportedly used the n-word in public.

“Soulja Boy was unaware that the video on Cameo was tied to a group that promotes hate,” a Soulja Boy spokesperson told BuzzFeed News via email. “The promo video was what the Cameo had directed and in no way supports his personal beliefs. He greatly apologizes to anyone who may have been offended.” 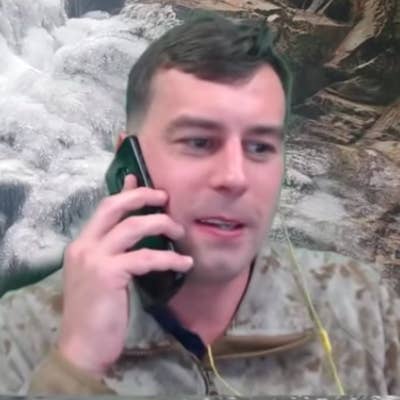 The GDL is closely associated with white supremacist and failed California Senatecandidate Patrick Little, who was profiled by the Anti-Defamation League in August for “spreading anti-Semitic hate” around the country.

In a livestream on his YouTube channel Monday, Little talked to Handsome Truth about what he referred to as “a very intelligent way to get celebrities to name them and shame them” — “them” referring to Jews.

“He got Brett Favre, for a very low price, to name the small hats,” Little said.

In the brief conversation, Handsome Truth complained that the Favre video had been taken down from YouTube several times, but said that it had already spread to 4chan and the anti-Israel website Veterans Today. 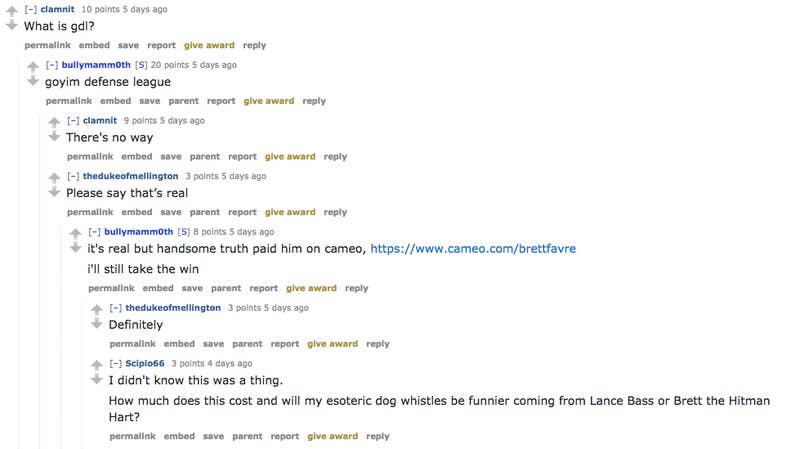 “Good troll with the Brett Favre thing. Well done. He either has to double down or renounce it,” Little said.

“On or about November 22nd, Cameo talent received requests that appeared to be aimed at supporting the American military. After recording the videos Cameo learned that the request came from an anti-Semitic group and contained content that could be interpreted as anti-Semitic,” Cameo said in a statement to BuzzFeed News.

“This was a blatant misuse of the Cameo platform and a violation of Cameo’s terms of service. This is the first incident of its kind in more than 93,000 Cameos and a gross misrepresentation of the talent’s political beliefs,” the statement continued. “Cameo immediately removed the videos from the website, requested YouTube to remove the content and created new filters to prevent this from happening in the future. The user has been banned from purchasing Cameos.”

Cameo CEO Steven Galanis told BuzzFeed News on Friday that the app directly connects fan requests with the celebrity in question, eliminating intermediaries such as publicists or managers — and possible intervention — and making the messages more personal.

“It’s a shame that this group is taking away from a platform that is bringing so many people joy,” Galanis said.

In the livestream Wednesday night, Handsome Truth and Sway Guevera were encouraging their followers to continue using Cameo to spread the messages.

“We have to all write something similar to that script and just go through that place and pick people to talk about the USS Liberty, okay?” Handsome Truth said. “Take that exact script of what Brett Favre said there, copy it, send it to that — what’s the name of that site again? Cameo.com, and use these celebrities against them.”