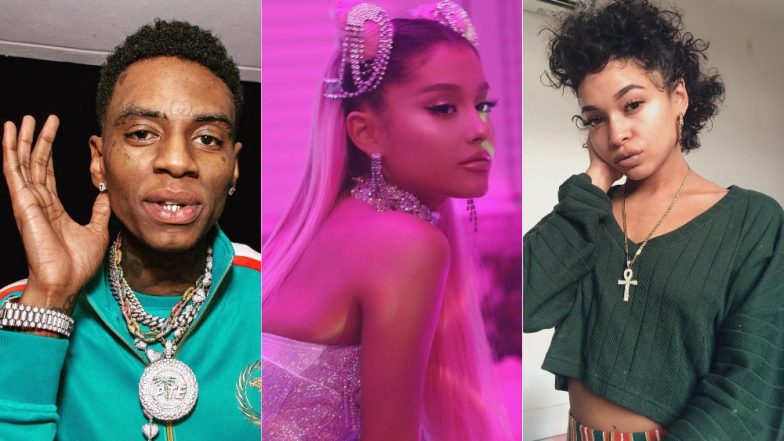 In case you missed it Ariana Grande caused quite a stir this past weekend after dropping a brand new trap-infused single 7 Rings.

Although the track is a complete BOP many have drawn comparisons between other songs like pretty boy swag by Soulja Boy and another track titled Mine by underground artist Princess Nokia--prompting both artists to actually speak out about it.

In a viral screen grab Soulja appears to have even went as far as to call Grande a "thief and demand she stop "stealing his swag" ....Thoughts?! 🤔🤔

Get into the FULL story below:

With the release of her latest single 7 Rings, Ariana Grande became the internet’s top trending topic last Friday, although it wasn’t entirely thanks to its success.

A number of musicians have accused the No Tears Left to Cry singer of plagiarizing portions of their music with the new smash hit, including rapper Soulja Boy and American up-and-comer Princess Nokia.

With the constantly rising number of copyright infringement lawsuits in the modern music industry, the accusations have turned a lot of heads.

Social media users are beginning to question the authenticity of the 25-year-old’s music, especially considering the number of references she made in 7 Rings.

The hit boasts about the benefits and luxuries that come with having an excessive amount of money. With that in mind, Grande chose to respect late and legendary rapper The Notorious B.I.G.

“Shoot, go from the store to the booth / Make it all back in one loop, gimme the loot,” she rapped.

Not only did Grande refer to Biggie’s 1994 hit Gimme the Loot, but her lyrics also pay homage to My Favourite Things — the Julie Andrews classic from The Sound of Music (1972) — in the first verse.

“Breakfast at Tiffany’s and bottles of bubbles / Girls with tattoos who like getting in trouble / Lashes and diamonds, ATM machines / Buy myself all of my favourite things,” Grande raps, revealing some of her favourite expenses.

Of course, to pay homage is not an act of plagiarism, however those who aren’t particularly fond of Grande or her music are using these references as “evidence” to back up the alleged acts of copyright infringement.

Ariana Grande attends the Heavenly Bodies Gala at The Metropolitan Museum of Art on May 7, 2018 in New York City.

The internet exploded after a news clip compared 7 Rings to Pretty Boy Swag. Soulja Boy, 28, was notified by his fans on social media that Grande had allegedly copied the chorus of his 2010 hit.

After making “the biggest comeback of 2018,” the rapper felt confident enough to address the accusations on Instagram. He reposted the viral clip and wrote, “Ariana!?” in reference to the recent interview he conducted that went viral.

The Crank That star then took to Twitter and replied directly to some of Grande’s tweets.

“Give me my credit. Period,” he wrote in response to the singer crediting her friends for helping her make the “celebratory bop.”

Princess Nokia, 26, was quick to share her thoughts on 7 Rings after hearing it for the first time. She posted a series of videos to Twitter that depicted her comparing the chorus to her own 2016 single, Mine.

“Oh! Did that sound familiar to you?” she asked after playing 7 Rings.

“Because that sounds really familiar to me,” she added before launching into Mine.

“Oh my God! Ain’t that the little song I made about brown women and their hair?” she added. “Hmm. Sounds about white.”

“You like my hair? Gee, thanks, just bought it,” raps Grande in the 7 Rings chorus — which according to Princess Nokia fans has both copied the song and removed the racial context, which was the entire point.

While a number of fans supported Princess Nokia in her claims against Grande, many “Arianators” fired back due to Princess Nokia’s position in the music scene as a newcomer.

How Mariah Carey’s ‘All I Want for Christmas Is You’ Finally Hit No. 1